There is no "typical" response to sexual violence. Survivors may vary dramatically in their response to a sexual assault. Some survivors may appear very calm and describe the assault with little or no emotion. Other survivors may express feelings verbally or by shaking, crying, restlessness, or tenseness. Remember, rape survivors have just experienced a terrifying event. Any response to the assault – whether it looks like the right response to you – is just her way of dealing with the assault.

Survivors of rape report feeling a number of different emotions after the assault:

Every two minutes, somewhere in America, someone is
sexually assaulted. (RAINN calculation based on 2000
National Crime Victimization Survey. Bureau of Justice
Statistics, U.S. Department of Justice)

One out of every six American women have been the victims of an attempted or completed rape in their lifetime.
(Prevalence, Incidence and Consequences of Violence Against Women Survey, National Institute of Justice and Centers for Disease Control and Prevention, 1998)

Sex is the weapon and power is the motive. Anyone can be a victim; male or female, child or adult. According to 1999 National Crime Victim Survey 72% of rapes/sexual assaults are not reported to police. 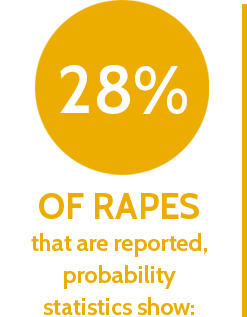 Therefore, even in those 28% of rapes that are reported to police, there is only a 16.3% chance the rapist will go to prison. Factoring in unreported rapes, about 5% – one out of twenty – of rapists will ever spend a day in jail. 19 out of 20 will walk free. (Probability statistics compiled by NCPA from US Department of Justice Statistics)